Discover the best of Top End Australia from Darwin

The ‘Top End’ is often referred to as Australia’s last frontier. It runs along the northern coast, from the capital city of Darwin in the west, through the wondrous wetlands of Kakadu National Park, and onto Arhem Land in the east. In this vast, unforgettable region that’s rich with culture and diverse ecosystems, you can do everything from watching huge saltwater crocodiles known as ‘salties’ and enjoying a refreshing dip in crystal clear plunge pools to checking out incredible Aboriginal rock art that dates back thousands of years.

Your Top End adventure is sure to be one of the biggest highlights of your trip to Australia. To make the most of it, be sure to include these destinations on your itinerary, starting with the tropical, modern city of Darwin. 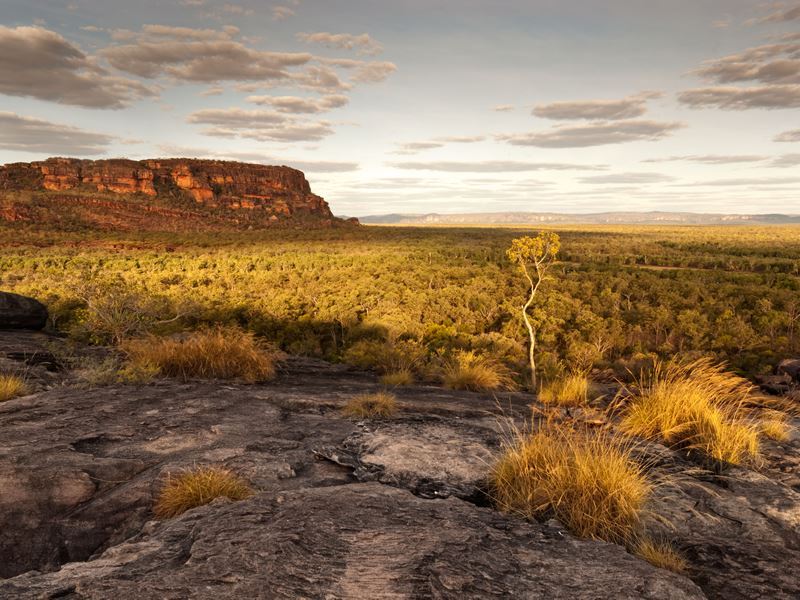 The colourful laid-back city of Darwin offers a lot for a small outback town. Red, pink, purple, peach, orange and yellow, there are so many colours in Darwin’s famously breathtaking sunsets they’ve been called not only the best sunsets in Australia, but some of the best in the entire world. While they can be viewed throughout the city, some of the top spots include Mindil Beach, the historic Stokes Hill Wharf, and Casaurina Coastal Reserve, with the endless coastline views providing the ideal backdrop. 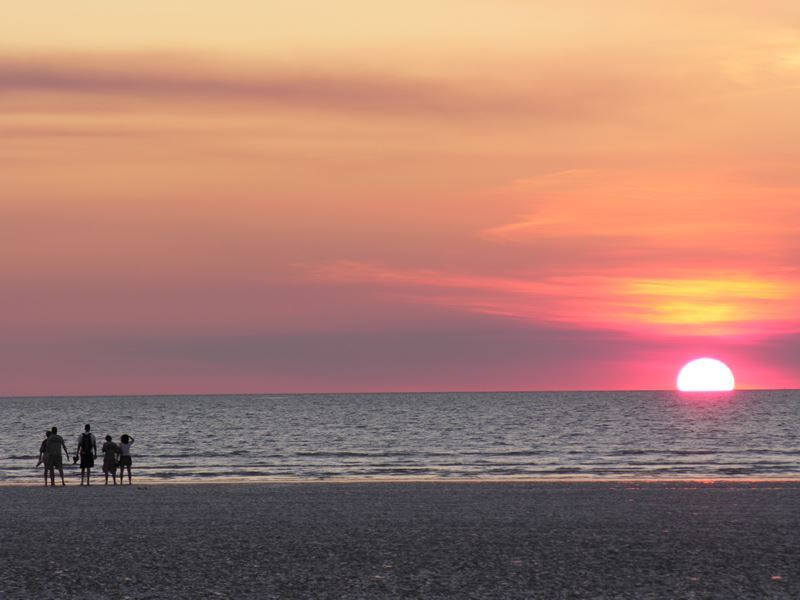 Be sure to sample Darwin’s food scene in one of multiple trendy cafes, like Four Birds, nestled into the arcade on the site of the old Star Cinema with stools spread underneath a burgeoning frangipani tree, or Alley Cats Patisserie, renowned particularly for its scrumptious breakfasts, brunches and sweet treats. Darwin’s markets are well-worth a visit too, like the Thursday and Sunday night Mindil Beach Sunset Market, open from April through October, and the daily Saturday Parap Markets. If you like festivals, aim to visit when the Darwin Festival is held for three weeks in August. The crown jewel of the festival season is one of the highlights of the year and offers the chance to enjoying dining and drinking at numerous outdoor bars and restaurants as well as dancing to some of Australia’s top music acts.

When it comes to museums, the Museum and Art Gallery of the Northern Territory is not-to-be-missed with its Top End-focused exhibits that include an impressive Aboriginal art collection, complete with dot paintings from the desert, bark paintings from Arnhem Land and carvings from the Tiwi isles. There’s also an entire room that’s devoted to Cyclone Tracy which illustrates life before and after the 1974 disaster. Visitors stand in the dark room, listening to the powerful sounds of the cyclone, something that’s impossible to forget.

Crocosaurus Cove offers the chance to get as up close and personal as you’d ever want to with massive crocodiles. Located right in town, you’ll not only see them in state-of-the-art pools and aquariums, and you can even go down into the water with them via the transparent ‘Cage of Death’ if you’re brave enough.

Kakadu National Park is a UNSECO World Heritage site that’s considered a must-visit in the Northern Territory. This jaw-droppingly biodiverse region is home to some 10,000 crocodiles, including both salties and the freshwater type, along with wallabies and kangaroos, wallaroos, quolls, dugongs and a host of bird species, like hooded parrots, lorikeets, a variety of herons, pelicans, geese and much more. 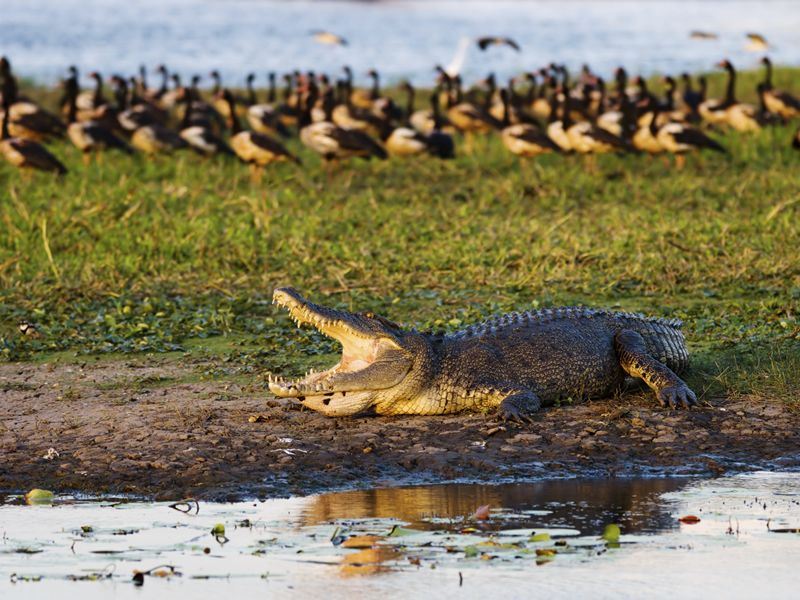 In Australia's largest national park, you'll also discover rock art galleries that date back some 50,000 years, and have the chance to learn about Aboriginal culture from the Bininj/Mungguy, the land’s traditional owners. The two top spots are the Nourlangie Rock art site, where you can view a painting of a Dreamtime ancestor called Lightning Man, who is said to still control the violent lightning storms the wet season is known for, as well as the rock crevices that were cut by the ancestors at Nourlangie Rock. Ubir Rock is the other famous rock art gallery, which includes handprints of hunters, animals and Dreamtime figures as well as a painting of the Rainbow Serpent. Take a guided tour to find out how this art depicts the land’s cultural, social and natural history, and embark on the steep climb to Nadab Lookout here for the opportunity to take in especially awe-inspiring views across the floodplains. 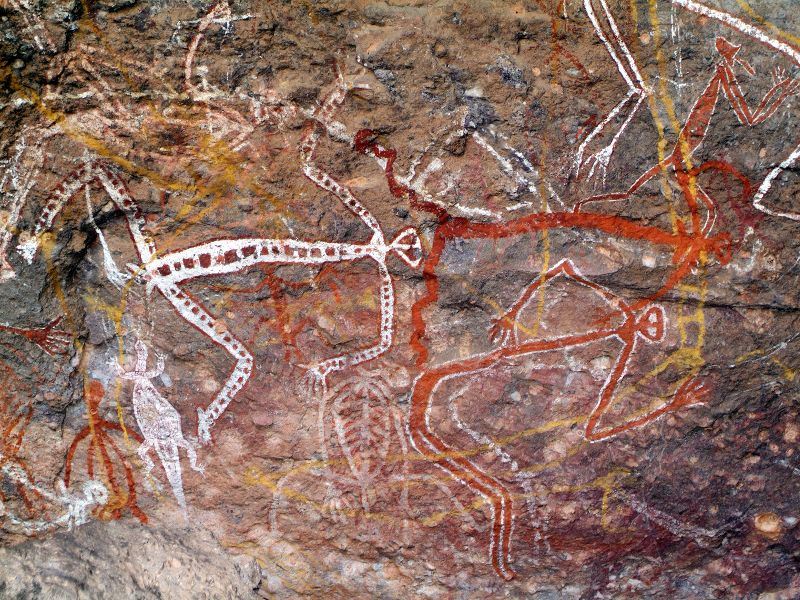 The park is home to magical wetlands and magnificent waterfalls too, like Jim Jim Falls which sits within the Arnhem Land escarpment and boasts crystal clear waters along with beautiful sandy beaches. You’ll need a four-wheel drive to access the falls via an unpaved road that’s typically open between late May and early October. Once you’re here, the best way to experience it is to take the just over half-mile trek that winds through a monsoon forest, culminate at a gorgeous, deep pool surrounded by nearly 500-foot-high cliffs. Twin Falls is a waterfall that thunders over a soaring red escarpment that can be accessed by ferry boat in the dry season. It also offers powdery white sands and stunningly clear waters. 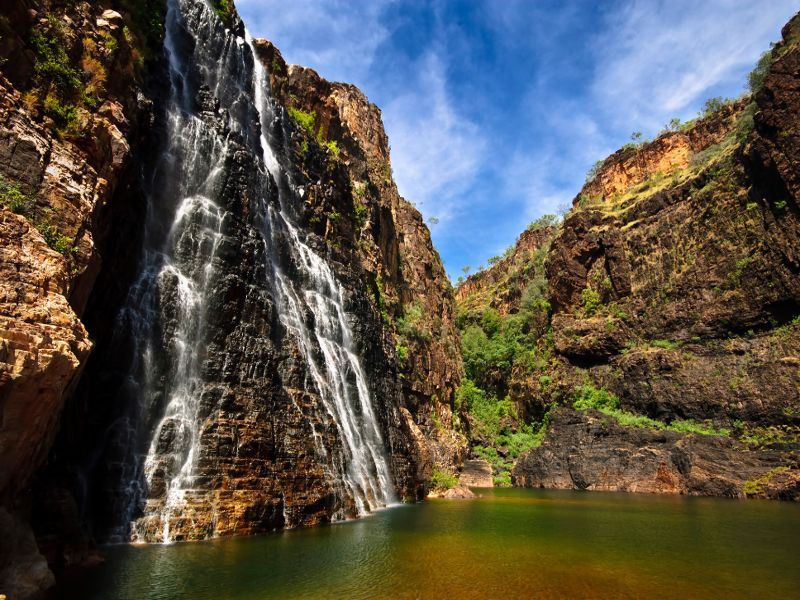 Remember ‘Crocodile Dundee?’ The 1986 film put Gunlom Billabong in the spotlight, making it famous. Now is your chance to see it in real life by taking a walk to the top of the falls and lookouts, where an infinity pool offers panoramic vistas of much of the park’s southern region.

You won’t want to miss Katherine Gorge either, with the dry bushland featuring pockets of rainforest alongside streams and water holes, a striking array of wildflowers, red rocks and escarpments. Wherever there is water, the area teems with wildlife from colourful birds and lizards to freshwater crocodiles. The highlight here, of course, is the Gorge itself, but there are practically endless ways to explore it. An ideal place to begin is the Baruwei Lookout Walk, a fairly easy one-hour route with some steep sets of stairs that provide a dazzling bird’s-eye view of the Katherine River.

The Gorge offers an outstanding series of walking routes for serious bush walkers too, including the over 40-mile-long Jatbula Track. Arguably the best way to experience it though, is from the water, where you’ll be surrounded by towering sandstone cliffs in what feels like an entirely different planet. There are a variety of cruise options that can make it happen, all of which include knowledgeable guides that will regale you with interesting stories and insights into the local Jawoyn people as you take in the grand scenery. 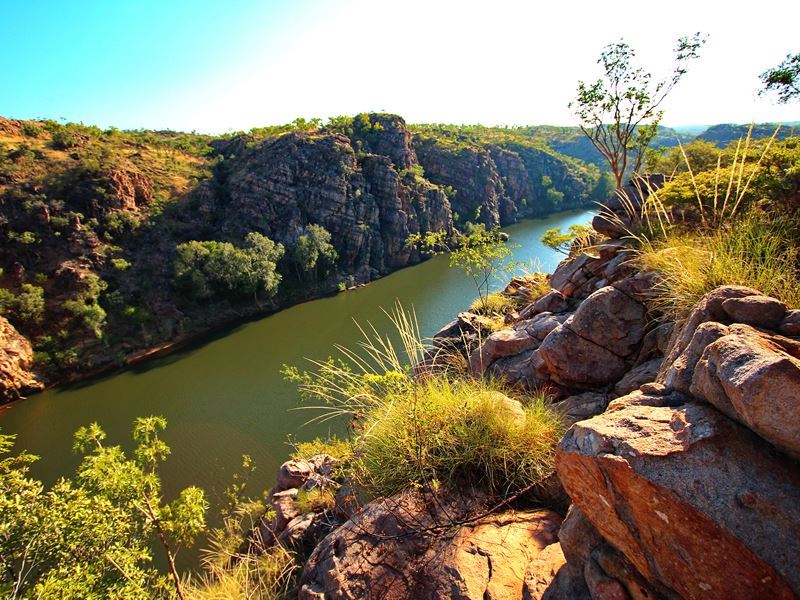 The Mataranka Thermal Pool lies in Elsey National Park, east of Mataranka, about 260 miles southeast of Darwin. This is your chance to soothe those muscle aches developed from all the hiking you’re bound to do. Visitors can soak in the warm, 30 to 34 degree Celsius crystal clear waters of the natural pool that sits within a palm and paperbark forest. A pleasant, two-and-a-half-mile walk along the Roper River through the bush from 12 Mile Hole campground will bring you to Mataranka Falls, another highlight in the park and an especially spectacular sight to see. 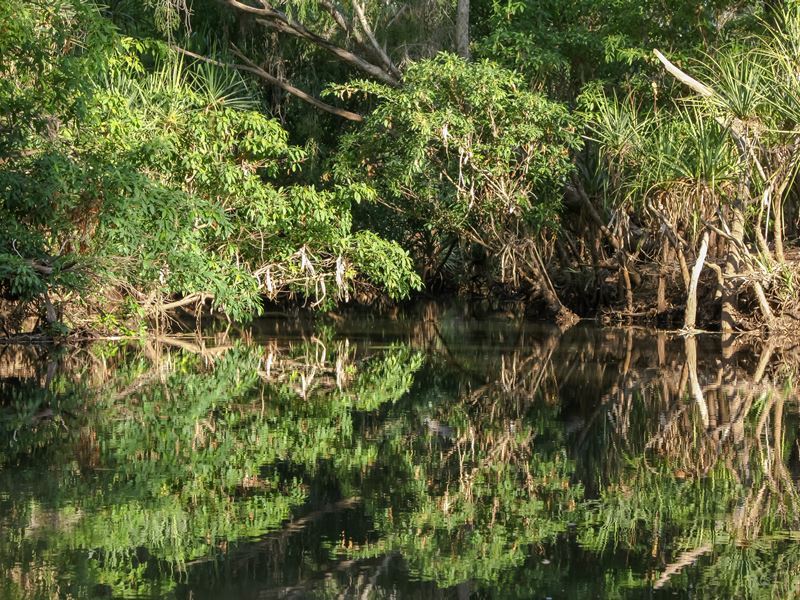 Just a two-hour drive from Darwin, Litchfield National Park is home to a number of must-dos, like cooling off on a hot day at Buley Rockhole, a series of cascading waterfalls and swimming holes, as well as viewing a fantastic double waterfall, Florence Falls, set among a monsoon forest, and taking the 135 steps down to the plunge pool for another unforgettable dip. If you’ve got a four-wheel drive, you can head out to discover the weathered sandstone columns of The Lost City, the majestic Tjaynera Falls and the Blyth Homestead Ruins too. 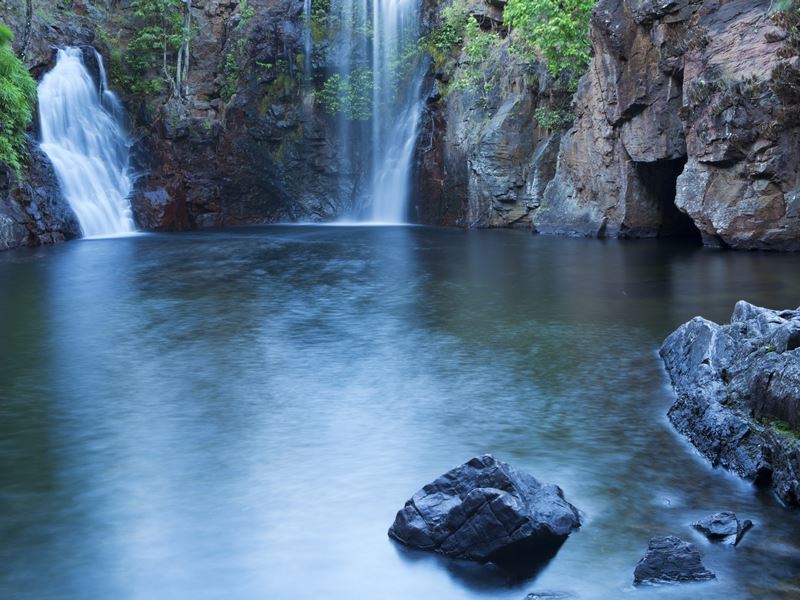 Visitors can also check out the fascinating magnetic termite mounds. There are hundreds of mounds, all around six-and-a-half-feet-tall, which reveal the impressive architectural feats of the insects that build them. Each are aligned north and south, mimimising exposure to the sun while maximising temperature control, which makes these tiny insects rather extraordinary.

Your time in the Top End would not be complete without a visit to the Tiwi Islands of Bathhurst and Melville, which are situated only about 50 miles north of Darwin, accessible via a 20-minute flight from the capital city. While they’re easy to get to, they have an exceptionally well-preserved indigenous culture, as well as being famous for their distinctive art and Pukumani burial poles.

While you’re here, you can purchase exclusive Tiwi Island works of art like pottery, paintings, clothing and carvings, from the artists themselves as well as take advantage of the unique chance to sample damper and billy tea straight from the fire with the Tiwi women. If a swim is in order, the clear, shady waterhole at Tomorapi Falls is ideal.

While exploring the Top End can be done independently, tours offer the chance to save time and effort doing all of that organising, while enjoying lots of local insight and knowledge that can make all the difference in a holiday.

There are multiple options, with something to suit just about every preference, including the Top End Discovery Self-Drive tour, which begins and ends in Darwin. It includes accommodation and boasts a number of highlights. You’ll take a scenic cruise through both Kakadu National Park and Katherine Gorge, have the chance to marvel at Aboriginal Rock Art, swim in the Mataranka Thermal Pool and explore Litchfield National Park. 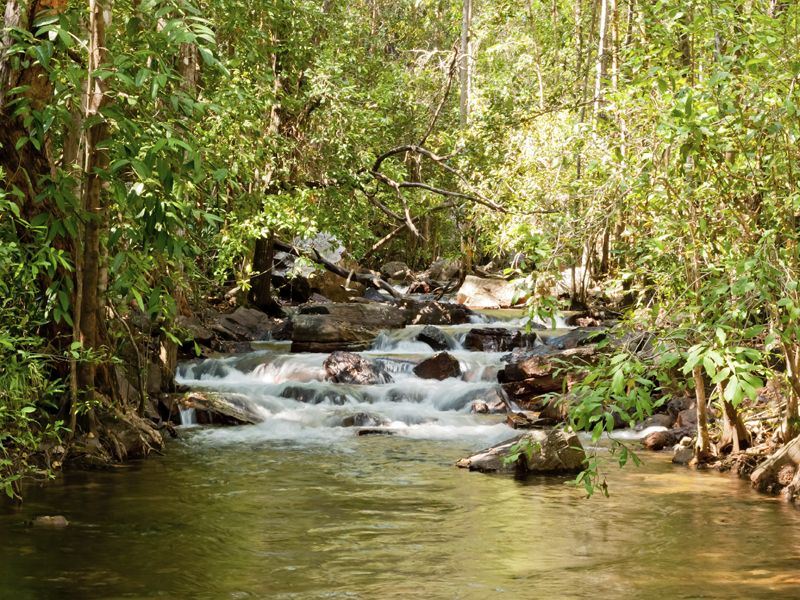 Kakadu’s Ancient Secrets is a five-day, four-night tour that includes accommodation, meals, a number of activities and excursions, as well as an expert tour guide throughout. You’ll get to enjoy lots of wildlife watching, a visit to Nitmiluk and Litchfield national parks, a cruise on Katherine River, and the chance to view and learn about Aboriginal Rock Art in Kakadu National Park.