I have recently returned from a month long trip to Australia, my husband and I hired a campervan and set off on a road trip. We travelled up the east coast from Sydney to Cairns, covering a total of 1,633 miles. One of the places to see on our itinerary was the Whitsunday Islands. Having heard so much about this world famous beauty spot I could not wait to experience it myself. At 1,268 miles into our journey we arrived at Airlie Beach, chose a campsite and booked ourselves onto a boat trip. The next morning we left Shute Harbour behind and cruised along the Whitsunday Passage passing lush tropical islands and turquoise coloured waters. 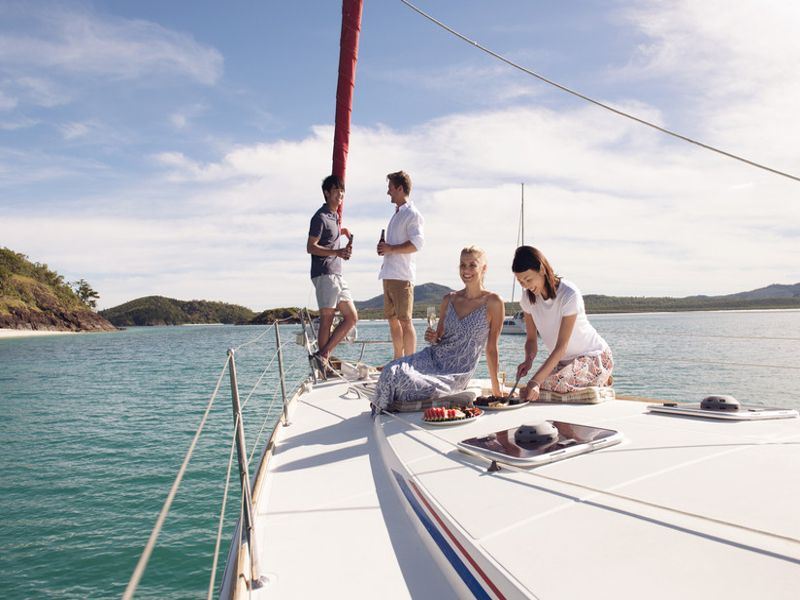 Named by Captain Cook as he sailed past them on Whitsunday, there are altogether 74 sun-drenched islands, only eight have resorts on them, the rest are uninhabited.

The first stop of the day was Whitehaven Beach on Whitsunday Island. This is the most popular and most documented beach in the Whitsundays. The strikingly white sand backed by lush tropical hillside all falling into stunning blue waters made me realise exactly why it is known as one of the worlds best beaches. Jumping off the boat I had to pinch myself, I couldn’t believe I was on Whitehaven Beach! It truly is a beautiful place. The vividly white sand stretches for 7km and is made up of 98% silica. This means it doesn’t get hot, a bonus when you want to get in the water during the heat of the day without burning your feet. The sand is so fine that NASA produced the Hubble telescope using it. On that note be careful with cameras and phones when on the beach as due to its fineness it can damage them. It is great for exfoliating your skin and cleaning up jewellery though! Don’t take any souvenirs from the beach; this includes shells, sand and coral as the island is protected by National Park status, which means you could face a hefty fine of up to $10,000 if caught doing so! The beach is a turtle breeding ground, so you will more than likely see them gracefully gliding through the water. Whitsunday Island is great for exploring with plenty of walking trails leading to some fantastic viewpoints. One right from the beach takes you to Solway Lookout. We followed a slowly winding track, which took us up to the viewpoint in about 15 minutes. We learnt some fascinating facts about the flora and fauna on the island from our tour guide. There are also information boards dotted near the walking tracks, which are quite useful.

North of Whitehaven Beach is Hill Inlet, the views from the lookout point here are awesome. The pure white sand mixes with swirls of turquoise waters to create mesmerising patterns. You can camp at a few locations on Whitsunday Island, although a permit is required to do so. There is a campground just behind Whitehaven Beach. I can’t imagine a better place to pitch up a tent for the night, falling asleep to the soft sounds of the ocean and waking up to views of shimmering sands and azure blue waters, utter bliss! Camping equipment can be hired through tour companies who will also drop you off at your chosen location.

As we climbed aboard the boat ready for the next stop on the trip we waved goodbye to Whitsunday Island. With the warm sea breeze blowing gently across our faces it was time to catch a few rays as we continued to sail along the Whitsunday Passage. As the magnificent sight of Langford Island and spit appeared on the horizon, the disappointment of leaving the previous beauty spot completely disappeared. The spit emerges at low tide revealing a sandy path between the water. It was such a novelty to walk along it, admiring the shallow waters filled with coral reef either side. It’s a fantastic place for a photo opportunity too. Fringing the Great Barrier Reef means that the Whitsunday Islands have an abundance of marine life. If you fancy going for a snorkel it is worth the effort of pulling those fins on and walking backwards into the water. The island itself is tiny, I felt like Robinson Crusoe as I sat on the waters edge running sand through my fingers and gazing into the glistening water.

The final stop of the day was Daydream Island, a very dreamy resort a short boat ride from Shute Harbour. It has its own outdoor aquarium called the Living Reef, home to an impressive 115 species of fish and numerous different corals. We had just over an hour to spend exploring and using the facilities at the resort. After taking a look at the resident sharks and stingray in the Living Reef and strolling through the Rainforest Walk, we found a hammock by the waters edge to laze in the late afternoon sun.

After such an awesome day nothing could have been better than watching the sunset between the islands as we sailed back to Shute Harbour with a cold beer in hand, marking the end of a marvellous day in paradise.